“In an old spinning factory in Germany, in the former East German town of Leipzig, it is still possible to see traces of lives ground into the bare factory walls and floors.  Spinnerei, as it is still called, was once home to the largest cotton spinning production in Europe.  It’s fortunes over its 125-year history waxed and waned with economic and political upheavals, two world wars and a cold war, but always, despite fights for wages and conditions, there existed a strong community of workers. When the wall came down in 1989, Spinnerei began its transition from a hard, grafting factory to a space for artists’ studios, workshops and exhibition spaces.  It is a space rich in history with stories to tell, much like one of its visiting artists, Janice Gobey.

Gobey came to Spinnerei in August 2017 as part of a residential scholarship offered to only a few international artists per year.  With a rough idea in mind of the collection she wanted to create her time there produced the backbone of her current exhibition, Running at Night.  Surrounded and inspired by over 100 artists who are based at Spinnerei full-time, Gobey has produced her most accomplished work to date.  Like her previous collections, Running at Night is more than a loosely themed assemblage of work but instead conveys a powerful message.  This collection offers a window to a world that more and more people are experiencing, one that so many people know intimately and so many others are wilfully ignorant of; dislocation and disharmony.

The fox is a recurrent theme in Gobey’s work.  Often maligned and misunderstood the fox has come to signify cunning and brutality but in fact it is a small creature that gets by on its wits, furtive, living on the edge of, and the crumbs of, society, much like the plight of many people seeking refuge in a country not their own, the plight of most refugees world-wide.

Gobey is sensitively aware of the plight of those seeking a better life.  An emigrant from South Africa, a survivor of a bad marriage, Gobey is deeply familiar with the sense of dislocation, of coming to a new country and not quite fitting in, of feeling vulnerable and exposed and alone.

Her use of animals in her work are a reflection of the comfort and company she found in them growing up as a child.  The simplicity of nature and the honest order of things offer respite from the chaos and brutality of our human lives. The works seem to clearly say, “These creatures are simply going about their business”.

While her paintings of animals are calm and serene her images of people are more disquieting.  In Ethereal a woman sits with her back to the canvas. There is a gentle femineity to the work, a sensuality in the colour, the use of flowers, the relaxed posture.  Yet to sit with the collection is to understand that the subject is solitary and vulnerable, gaze averted, looking out to a place beyond, a place where she is not.

Gobey’s work reflects both an inner gentleness and a deeper societal disharmony. In a world besieged by economic uncertainty, environmental degradation, diminishing resources and inequality, the rising anger is palpable.  And in response, perhaps, to the disharmony we as a global people live in, men’s violence towards women feels like it is on the increase, depleting further the world’s transcendental harmony.  The works Rage, Simmer and Cool Down illustrate this face of violence that walk the streets daily.

Back in Germany, although a factory no more, the community is strong and it provides Gobey with a clarity of vision that taps into her own sub conscious and that of the wider community. Running at Night is more than a beautiful collection of paintings, it speaks a deep human truth of our times. 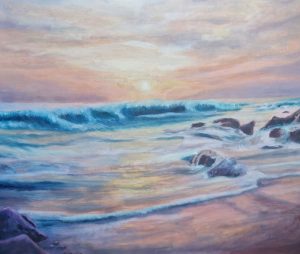 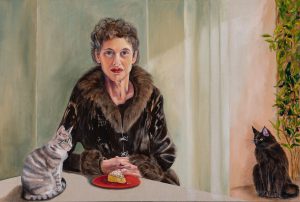 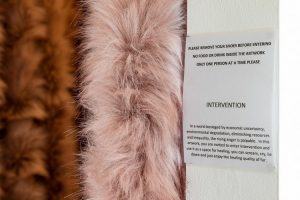 Another work from 2009, this is entitled Rend - it

Another one from the vault, 2010, final Masters ex

Can't recall the title of this work, it's from 200

This is from 2012, my first exhibition @fortyfived